For supporters, partners and funders list please switch to the ‘German Version’.

I also admire the social and archival goals that have led to this stock of costumes. The stock is like the memory of the theater artists hurrying from one project to the next. Eva Löbau (actor, Berlin)

The independent arts community needs its own stock of costumes in order to be able to work professionally and sustainably. The stock has been collected from productions financed using public funds and has been managed and operated on a voluntary basis. The stock of costumes from the publicly funded repertory and ensemble theaters are not available for use by independent productions. As a result, Kostümkollektiv has developed into an indispensable flagship position for the independent performing arts community in the last few years. Julia von Schacky (member of the artistic leadership team of Heimathafen Neukölln, Berlin)

Using materials jointly will continue to grow in importance in the future in light of multiple resource crises. Kostümkollektiv provides an exemplary model of how this can work. It is in the public interest to sustainably and institutionally support such an innovative institution. Otherwise, the state ends up relying on these idealists to exploit themselves in order to create value – and that is everything but sustainable. FUTURZWEI (Stiftung Zukunftsfähigkeit (Foundation for Sustainability, Berlin)

Every time I see a costume piece that has been made with love continue on its wonderful journey in a new production, my heart fills with joy. Or I find new costume pieces that inspire me to pursue additional actions or for my peterfrost performance. Or when I see my own costume pieces that are like old friends. And at first, I am startled because I am so connected to them, and then I am happy to see them continue on their journey. Cora Frost (singer, performer and director, Berlin)

The idea of Kostümkollektiv is such an obvious idea from the field of artistic practice of independent theater that one can only wonder why it has not yet had a much larger impact. Aside from the economic and ecological motives for the additional usage of costumes from productions that are no longer being performed and that cannot be stored by the artist groups and performance venues, a stock of costumes for independent productions, which Kostümkollektiv has been operating since 2011, is also a significant instrument speaking to the special production methods of independent theater: rehearsals, understood as artistic research, also clearly require the constant trying out of costumes and props in order for the pieces themselves to be developed step-by-step! In order to do so, an accessible and affordable stock of costumes is absolutely essential. Anyone who has worked on an independent production knows how difficult it is to continuously browse through secondhand shop, purchase new costume pieces to “try out” and then return them, knows the dramas caused by using privately owned rehearsal clothing and knows the painful compromises because there is not enough budget to be able to make the right decisions. They know that is nearly impossible to find extraordinary costume pieces, like historic outfits, on the market and the problems of finding winter items in the summer and vice versa: a stock of costumes is such an important element for independent artistic work that the significance of the initiative of Kostümkollektiv can hardly be praised enough. Dr. Henning Fülle (author of Die Modernisierung der deutschen Theaterlandschaft [The Modernization of the German Theater Landscape (1960-2010)[, academic associate of Performing the Archive – Für ein Archiv des Freien Theaters [For An Archive of Independent Theater])

Costume of the Month 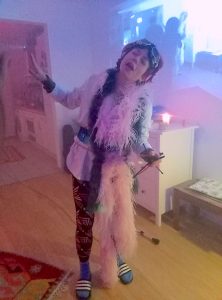